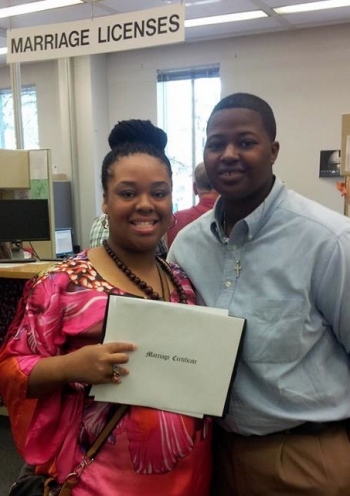 “I think that the best day will be when we no longer talk about being gay or straight–
it’s not a ‘gay wedding,’ it’s just a ‘wedding.'”
—Pink (Pop singer-songwriter)

Married in June, Johnna and Tay Tidwell are young newlyweds—though their wedding didn’t happen exactly the way they envisioned. When they became engaged, their original plan was to wed in Canada, where same-sex marriages are legal. The wedding plans changed when an Indiana federal judge struck down the ban on same-sex marriages on June 25, 2014. Johnna and Tay married the next day at the clerk’s office, shortly before a judicial stay halted any further marriage licenses for same-sex couples in Indiana. Despite disapproval from some religious communities and family members, their love for each other has allowed them to endure.

Click here to read the rest of the post.  It’s over on the Loved for Who You Are blog.