Waves of Great Change Are Always Moving Us Toward Love 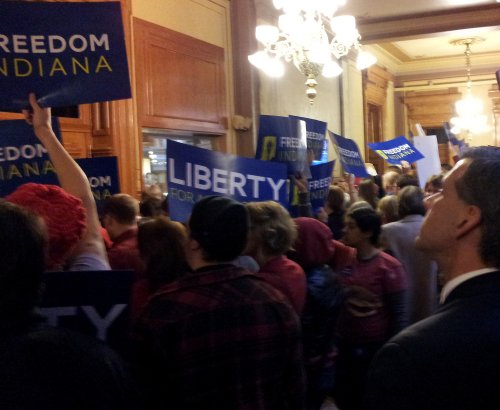 “There’s a river of my people. And its flow is swift and strong.” —Pete Seeger

“The secret of change is to focus all of your energy, not on fighting the old, but on building the new.” —Socrates

When I recently attended the Indiana House of Representatives Hearing on HJR-3 (the proposed constitutional amendment to ban same-sex marriage in Indiana), I discovered something I hadn’t expected. I learned that people who lovingly support a cause (or oppose a cause) likely do not fully grasp what it’s like for the individuals who are living the issue, day in and day out—for 50 years or more in some cases.

That insight hit me as I was standing near friends and the House voted to delete one sentence banning civil unions from the proposed amendment. It was an important partial victory for those in attendance. The next thing that happened surprised me. A close friend began sobbing, a body-racking, heart-felt release welling up and pouring out from a place deep within. It was humbling to witness her vulnerability and raw, uncensored human emotion. It was as though she had been holding her breath, sealed off tight in a protected vault somewhere, and someone had finally told her it was safe to breathe.

I don’t know what it’s like to live that life.

But I understand better now, after holding my friend while she sobbed, that my friends are harboring deep wounds and that healing is desperately needed—in our families, in our political system, in our media, in our culture, and in our country. To quote Nelson Mandela: “The time for healing of the wounds has come . . . for the birth of a new world.”

Where do we begin?

Rather than arguing, fighting, or judging, what would it be like to invite a gay couple into your home for dinner? Not to preach or explain your views; but rather, simply to learn by listening. Perhaps you could invite your LGBT son, daughter, neighbor, parent, grandparent, uncle, aunt, sister, brother, or cousin over for a chance to get to know them a little better. Ask them to tell you their stories—their joys and sorrows. Ask them what wounds need healing. Listen from your heart. It all begins there.

We don’t need a law or a book or a specific religion to learn how to love. We just need to open our hearts . . . a bit wider.